Want to be a billionaire? 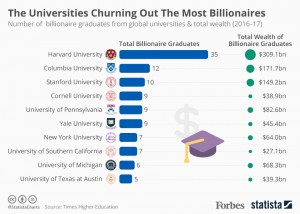 In the article they say that:

Harvard is the world’s premier university for producing billionaires. According to Times Higher Education, the institution boasts 35 billionaires in its alumni with a collective net worth of $309 billion. In fact, it has almost three times as many billionaire graduates as second-placed Columbia University. Bill Gates and Mark Zuckerberg are notable billionaires who dropped out of Harvard and among those who graduated, Michael Bloomberg is considered the wealthiest with a net worth of about $40 billion.

As mentioned above, Columbia University comes second on the list with 12 billionaires who have a total wealth of $171.7 billion. Though it can’t compete with Harvard in terms of the sheer number of super-rich alumni, Columbia University can boast the world’s wealthiest graduate in Warren Buffet. The business magnate graduated with a master’s degree in economics in 1951. Stanford University rounds off the top-three with 10 billionaires among its former students. Collectively, they have a net worth of just under $149.2 billion. The first non-American university to make the list is Oxford in the UK at number 12 with 4 billionaires among its alumni with a collective $28.4 billion fortune.

10 Things You Don’t Know About Us