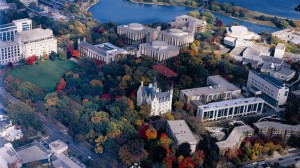 On April 12 at 9:40am we will have Dartmouth, New York University, Northwestern, Vanderbilt and Washington University at St Louis visiting Band. This week we will post fun facts about each of the visiting colleges – one per day and in alphabetical order.

Today we will focus on Northwestern. Did you know that?

10 Things You Don’t Know About Us